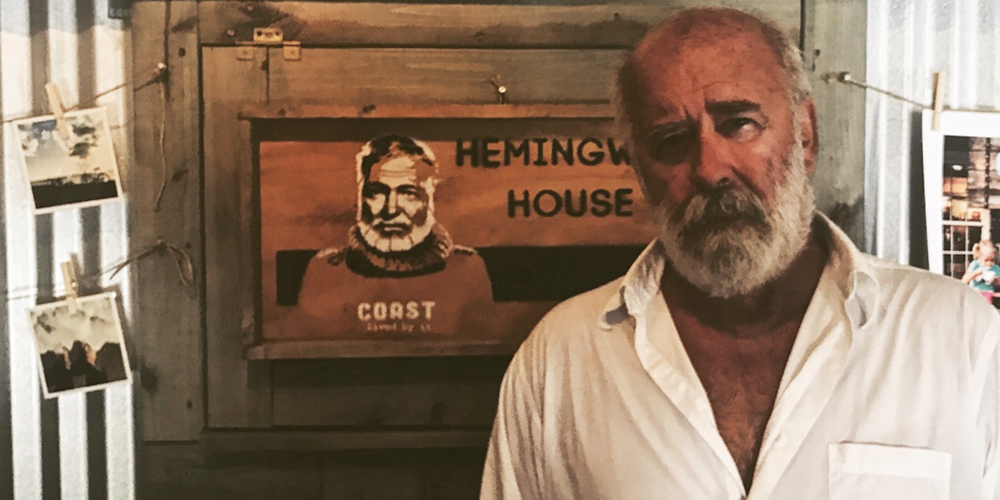 Finding comfort on the wood and stone porch of Coast’s 150 year-old digs deep in the heart of Bahama Village is not easy. But certainly worth a try. Especially on a sweltering Fathers’ Day in Key West. Often, in the midst of this quest, passersby will notice and stop to peruse the activity in hopes it is being offered as gratis warm-up for Punch & Judy episodes.

Sometimes, amid the backdrop of tasteful Hemingway likenesses framing my chiseled visage, not to mention the fact Papa’s one-time shanty is but a block down Whitehead, they will notice a similarity in appearance between yours truly and the late Key Wester. Especially if they have been snorkeling in the sea of rum in which our island constantly is awash. Testament to such tippling often is in the form of failed but dogged attempts at making music by blowing, cross-eyed, into conch shells. Occasionally even the inhabited variety.

On a recent Sunday, for instance, a dapper octet of Asian visitors — replete with the most charming array of parasols — happened by. Obviously in no particular hurry, they lingered before the porch casually observing my dilemma in finding comfort. Then it happened. I hadn’t heard such panicked, staccato contralto chatter since witnessing the explosion, some years previous, of a giant wok full of the days special (beef chow mein, I believe it was) in the kitchen of a popular local Chinese restaurant. The assembled eight had noticed a likeness of Hemingway on one of our T-shirts and it’s similarity to moi. The serendipitous spontaneity of the occurrence apparently was too much to process gracefully. The frenzied din continued for perhaps a minute. Maybe two, before they regained verbal equilibrium and realized the forces of evil were not at work. Then, laughs all-around.