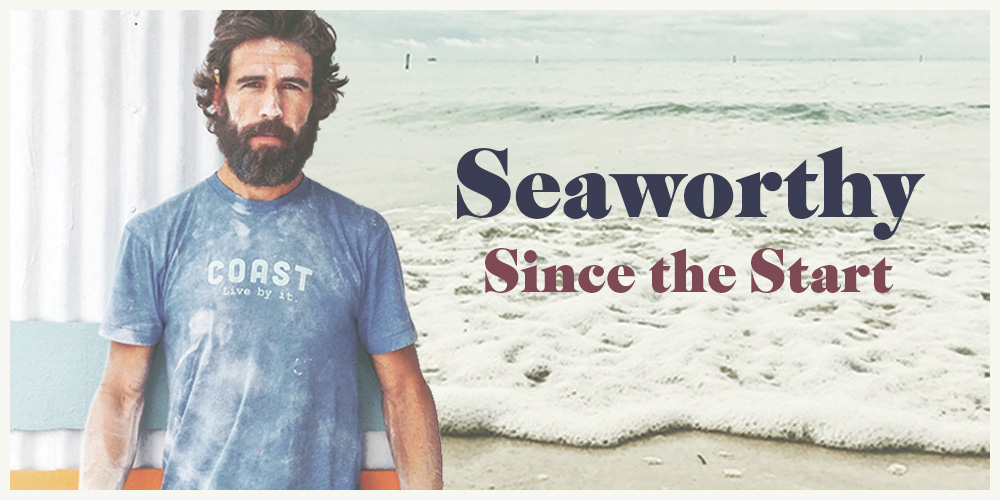 The crew at COAST first set sail in 2012 as an experimental craftsman collective with a home port in the Safe Harbor district of Stock Island — Key West’s gritty neighbor to the east.

Helmed by artist, boat captain, and ship builder Billy Kearins, the course for COAST was plotted on the go — an accidental and ever-evolving venture that has, to this day, continued to defy categorization.

From the rusted bones of a former boatyard came a renegade work space, an underground live music venue, an apparel design studio and an experiential education program. The curious mix of outsiders and offerings earned the burgeoning company a local fanbase and national recognition.

The crew’s unofficial early uniform, a simple single-color handprinted t-shirt with the tagline “Live by it” soon became an island staple for other locals who supported this hidden gem on the ragged edge of town.

Through a half decade of refinements and realizations COAST transitioned from the fringes of Front Street, Stock Island to the historic Bahama Village neighborhood of Old Town, Key West, slowly evolving into a curated lifestyle brand — offering classic designs, printed by hand on the fabled front porch of the Whitehead Street Outpost. All the while, the crew remained true to their ragtag origins — pulling off raucous last-minute concerts at obscure venues and bringing a raw but sharpened edge to radical collaborations with like minds from coast to coast.

Through the years, COAST has straddled the line between broad, mainstream appeal and authentic, underground allure.

As the global pandemic of 2020 changed the status quo for much of the world, so, too, has it shifted the tides for this end-of-the-road outsider.

COAST now finds itself on a new course. Stripped to the bare essentials and stocked only with survival provisions, the journey has brought them back to their experimental roots — and beating upwind into uncharted territory.

But if there’s anything these salty craftsmen by the sea have learned over the past decade, it’s that surviving, in spite and because of rough seas, is what makes the voyage worthwhile — and is ultimately just a moment to embrace and hold fast while heading toward that next safe harbor.