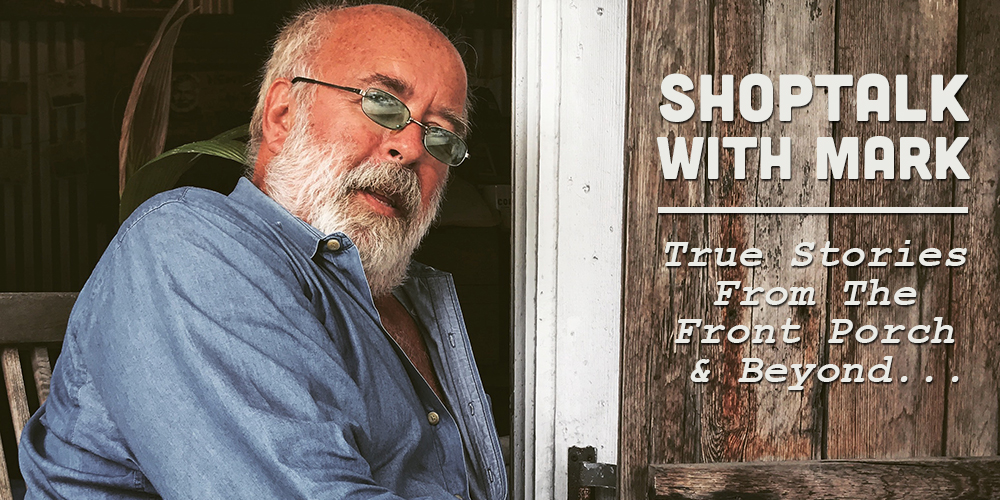 Well, we’re starting another series. Probably not a big surprise to our cherished following — we’ve started about a dozen or so over the past four years. Some still in effect, some doomed from the start. You never really know where ideas will go or where projects and prototypes might end up, but I guess that’s kind of the beauty of it. So we cast them off the dock with a certain sporadic regularity to see if they’ll float.

​This particular series will feature the pensive pondering, reverie and cries for help from my old pal Mark, aka The Coast Bard. Never to be confused with actual deep thought, Mark’s reflections basically will be a blog series — hopefully once weekly​ and ideally available on Monday mornings so you can get your work week off on the right foot. Or left, if you prefer. But again, we’ll see. At any rate, before we drop the first episode on you, I thought it might do some good to offer the backstory, so here goes…

I met Mark reluctantly in 2002 — about a week after I started scrubbing decks on a couple of boats down at what was then the Hilton Marina — I believe it’s now part of the Piñacoladaburg conglomerate​.

Whatever the case, I’m 22 (go ahead — do the math)​ and totally happy to be scrubbing the foredeck of a sailboat in Key West. But as I wince-off a late night at the break of dawn, I look up to see an old salt. Believe he was wearing ​a ​plaid six-pence hat on that very morning — and notably older than everyone else within a stones throw of said vessel.

“Damn who’s that?” I thought — equally ​intimidated and irritated with what appeared to be a new crew member. Must be a new captain with the graying beard and advanced sense of style. A look that conveyed simultaneously — “I don’t care, I have been around the block, the block has been around me. And where’s the ice.”

Turns out Mark is a new mate on the boat. And in my mind — as well as every other twenty-something’s mind who was scrubbing the decks — was about to throw a wrench into everything we stood for.

Boy were we wrong.

Halfway into the first trip the “old man and the sea” was more interested in what we were having for lunch and if we drank during work than anything else. Told us in vague speak that he’d made a living as a rock journalist throughout the 70s, 80s and early 90s. And while it seemed too good to be true, especially for a classic rock aficionado like myself, turns out he had the stories to back it up.

Weeks passed. Beers consumed. Post-sunset-sail sessions of “name that tune” happened. And those soon turned into Saturday morning knocks on the door when Mark would roll up and meticulously peruse and activate our vinyl collection — or at least liberate it.

Ten years older — none the wiser. I’d kept in touch with Mark all along. Random meetings as we’d enter and exit Salvation Army looking for vintage scores, an old pocket knife, used letterman’s jacket, a lamp that said “lights out”.

It was always like we never stopped seeing each other — just picked up where we’d​ left off.

Then came Sundays​ at the new shop on Whitehead.

And new responsibilities with staffing a store in Old Town. Where for once ​we’d need to keep store hours — and our word. But no one wants to work Sundays. Not generic types, anyways…

As I said, our meetings were always just a matter of course – never planned. No phone number. No email. Just the outside chance I’d see him coasting Old Town on one of his vintage beach cruisers armed with nothing more than a pair of the most stylish shades you could imagine and a vintage shirt from the brothers Brooks that was one button between ​just ​okay and totally obnoxious. Mark is the master of drawing that line.

​Well, the ​chance ​meeting happened — that very week in fact. Believe it was outside Olivia Street Grocery after he’d bought a fistful of lottery tickets hoping to score another win for cool. Rumor has it he won the biggest ticket on the island in the past decade. Which might explain the steam in his step, distinctive hitch in his get-along and aura of well-being enveloping him before diminishing noticeably just before 5 p.m.

At any rate. I ask if he wants to work the shop on Sundays. And he’s in.

I recall his former occupation as a writer and ask if he’s interested in adding to the legacy. He’s into that, too.

​So let’s welcome Mark to the COAST Crew. He’s here at 803 Whitehead Street​ every Sunday.